Jason Pachol is the local yoga instructor behind a new weekly gathering Gay Men’s Yoga. OUTinPerth chatted to Jason about how he first got involved in yoga, and why there’s a need for a class dedicated specifically to gay and bisexual men.

How did you first get into yoga, what’s it’s greatest appeal?

When I moved to Perth in 1998 from Canada, I kept hearing about yoga all the time and even Madonna was fully into it in those days. I hadn’t actually done much exercise previously and was feeling unhealthy from a stressful job and a party lifestyle. I really wanted to make a fresh start and get fit, so I thought I’d give yoga a try.

I loved it from the very first class! I felt more relaxed than ever before and my body felt, and looked great after only a few more sessions. I felt joyful most of the day at work and became much less sensitive and reactive emotionally with my partner, friends and colleagues.

I think the greatest appeal about yoga is how it not only makes you more physically stronger but mentally and emotionally too. I strongly believe we all need to do some form of exercise or movement on a regular basis, even if it’s just walking around the block. Yoga can be really enjoyable especially for those who aren’t into the high impact fitness activities such running, CrossFit and the like. Honestly, you can experience so many benefits from yoga even by just going to one class per week.

What are the most common misconceptions about yoga?

That you need to be flexible is by far the main one, flexibility will improve by coming to yoga, though it isn’t actually the be all and end all. Improving strength and mobility are much more important than how flexible you can become. Unfortunately, so much social media around yoga shows yogis bending in all kinds of shapes that are unrealistic for most of us unless you practice for a very long time, so can be off putting to potential students. However, by coming on a regular basis, you will be amazed at what you can do and you may get into poses you never thought possible before.

Another misconception is that yoga is just a wimpy stretch class. Usually people who say that have never tried yoga. Yoga takes you out of your comfort zone and can be quite challenging. We always recommend students practice with compassion as to not harm themselves by overexerting themselves, but still make enough effort that you grow from the experience.

What would you to say to someone who’d never done yoga and was feeling hesitant?

Just trust, and try not to be afraid. Come along and do what you can do. Let the instructor know if you have any injuries or sensitive areas so they can give you suitable options for each pose or sequence. You can rest at any time or even leave if you really want.

Yoga is non-competitive and you will not be criticised or judged in any way, only supported by the teacher and the other students. Come with a friend if it makes you feel more comfortable. If yoga wasn’t effective, it would have disappeared by now, like other fitness fads of the past,  yoga is still gaining popularity because it actually works.

Your new project is a Gay Men’s Yoga Group, what was the inspiration behind setting this up?

I first created a Meetup group, Perth Gay Men’s Yoga, and was surprised on how quickly the community responded. So far, the classes have been well attended and has been a nice way to meet other guys and not at all pretentious. Many men enquire if they have to be gay or bi to come along and ‘yes’ is the answer as we may be discussing or meditating on topics specific to gay/bi men and their lifestyle.

Everyone needs to feel safe, and the space we hold is genuinely private and confidential.

The actual meaning of ‘yoga’ is union, unity in diversity, to bring together, to connect, however this night is for gay/bi men only. You know we don’t like to exclude anyone, but I wouldn’t ask to join an Indigenous Women’s group for example, so we hope others understand. 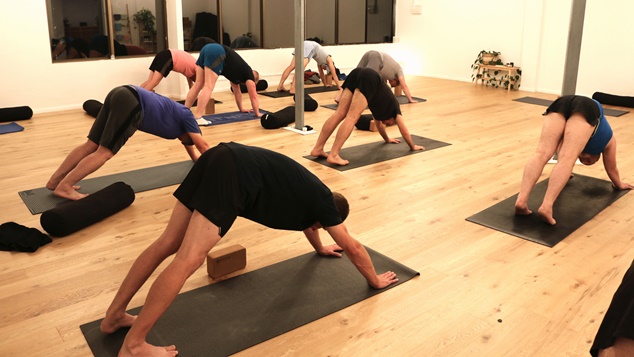 You’re also a Qi Gong practitioner, we’ve never heard of this before – what is it?

Qi Gong is an ancient, oriental movement practice, quite similar to yoga in many ways. Essentially, it’s a martial arts style of Tai Chi. There are over 3000 styles of Qi Gong that have developed over 3000 years, not unlike yoga with many styles out there now and new ones cropping up all the time.

‘Qi’ means life force energy and ‘Gong’ means ( skills to ) work with it. The practice helps to manage health, vitality and stress to name a few. Not unlike acupuncture it helps to clear blocked or stagnant energy and promote healing.

Most days, I work in Aged care and teach senior citizens Qi Gong as it’s simpler and easier than Tai Chi or Yoga and can also be done sitting in a chair. This may be something I offer to the LGBTQ+ community in the near future.

What do people need to start off in yoga?

Apart from a yoga mat, a bottle of water and a towel ( mats are available from the studio if you don’t have one yet ) Come with an open mind and a willingness to change for the better. The aim of yoga is really to have a peaceful mind and harmony in all your relationships.

Rather than about vanity, such as having a hot body or looking younger ( which does also happen), Yoga helps you to be the best version of yourself, improving your personality and character leading towards your best life.

Come along leaving your cares at the door and experience the bliss that yoga brings and make some new friends at the same time. It’s not nude yoga though, which many guys ask about actually, however you can wear as little as you like as long as you wear some kind of bottoms such as shorts or track pants.

Classes take place at The Yoga Room in Scarborough, 60 Scarborough Beach Road ( above Jetts gym ) every Wednesday 7:30 to 8:30pm. You can find out more on Meetup.com, on Facebook, and Instagram.

You can support our work by subscribing to our Patreon
or contributing to our GoFundMe campaign.